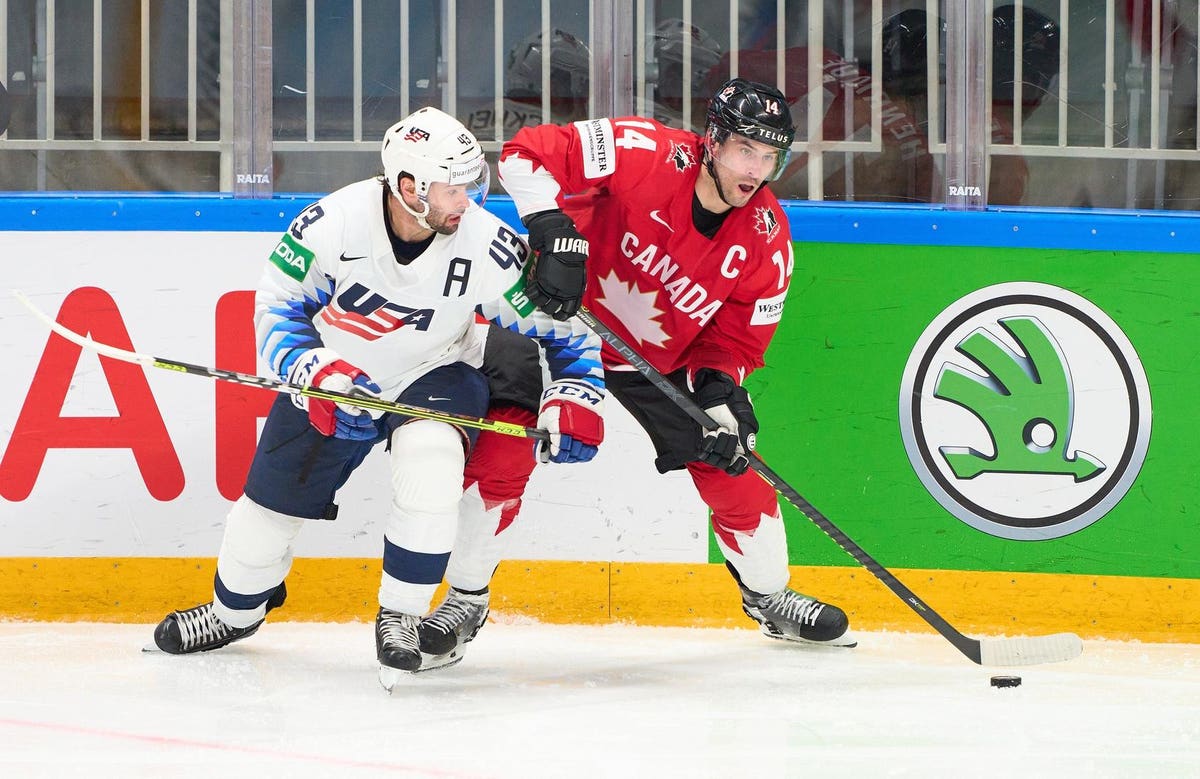 Their rosters didn’t look like much on paper, but Team USA and Team Canada have reached the final four at the 2021 World Hockey Championship in Riga, Latvia. They’ll go head-to-head in Saturday’s first semifinal game, vying for the opportunity to play for gold.

The United States team punched its ticket on Thursday with a 6-1 quarterfinal win over Slovakia. The Americans opened the tournament with a 2-1 loss to the defending champions from Finland, but have since won seven games in a row.

The Canadians have bounced back after a very slow start, when they scored just two goals in their first three games. They opened with a 2-0 shutout loss to the tournament hosts, marking the first time that Latvia had ever beaten Canada at the World Championship. Three days later, after Canada was humbled in a 5-1 loss to team USA, Germany also earned its first-ever win over the Canadians, by a score of 3-1.

The other side of the bracket in the 16-team tournament also yielded some unexpected results. Twelfth-ranked Denmark knocked off No. 4 Sweden on Day 2, No. 9 Slovakia stunned No. 2 Russia, and 19th-ranked Great Britain picked up a single point by taking Denmark to overtime before beating Belarus 4-3 for their first regulation-time win since 1962.

Perhaps even more remarkably, the leading goal scorer at the end of the preliminary round was a member of the Great Britain team, with seven goals in seven games. Liam Kirk, 21, played two successful seasons with the Peterborough Petes of the Ontario Hockey League after he became the first-ever British born-and-trained player to be drafted into the NHL, selected in the seventh round by the Arizona Coyotes in 2018. When the OHL was put on hold this season due to Covid protocols, Kirk spent some time playing in Sweden, then had a tremendous return home for the British league’s season-ending tournament, with 20 points in 14 games.

Here in North America, the World Championship is often treated as an afterthought. Because it runs concurrently with the Stanley Cup Playoffs, many top stars are either still playing for their NHL teams, or ready for rest, relaxation and rehab after tough regular seasons. Also, because the tournament is regularly played in Europe, game times fall in the morning and early afternoon.

On the other side of the Atlantic, the tournament is a big attraction for hockey nations. It normally draws big crowds, and is the top source of income for the International Ice Hockey Federation, which uses the profits to fund ventures to grow the game across lower-level divisions, younger age groups, and women’s hockey.

The 2020 World Championship, which had been scheduled for Switzerland, was cancelled due to the coronavirus. This year, a scaled-down event is being held in a bubble setting at a pair of arenas in Riga, Latvia.

Latvian fans are known to be among the most raucous in the hockey community, but weren’t permitted into the arenas until the final day of round-robin play on Tuesday, and then only in small numbers.

Despite the supporters’ best efforts, Latvia fell 2-1 to Germany in a must-win game, bringing its tournament to an end.

With this year’s tournament coming on the heels of a compressed NHL season, and with protocols that included yet another quarantine period as well as more bubble living, even more NHL players than usual declined their countries’ invitations to participate.

Typically, top Russian stars will join the team the moment their NHL seasons are over. In 2019, for instance, the bronze medal-winning Russian roster included Andrei Vasilevskiy in net and forwards Alexander Ovechkin, Nikita Kucherov, Evgeni Malkin, Ilya Kovalchuk and Kirill Kaprizov, to name just a few.

Even this year, the Russians attracted a stronger contingent of NHL stars than any other nation, including a particularly strong defense corps with Nikita Zadorov of the Chicago Blackhawks, Ivan Provorov of the Philadelphia Flyers and rising star Artem Zub of the Ottawa Senators. After their teams’ first-round Stanley Cup Playoffs eliminations, Vladimir Tarasenko of the St. Louis Blues, Dmitry Orlov of the Washington Capitals and Sergei Bobrovsky of the Florida Panthers also made the trek across the Atlantic to suit up for what’s currently called the ROC team, as the Russian Athletics Federation continues to deal with sanctions from several doping scandals. But despite the big names, the Russians’ tournament ended on Thursday, after its 2-1 overtime loss to Canada.

Last time the tournament was held, in 2019, a Finnish team that executed a patient, defense-first team approach won gold with just two players who had logged any NHL experience that season.

This year, the Finns were confident that the same strategy could once again yield positive results. Sure enough, they’re right back in the final four after a disciplined 1-0 win over the Czech Republic in their Thursday quarterfinal.

With more top players than usual staying home, countries like the U.S. and Canada were required to adopt similar strategies. It’s working for them, too.

New York Rangers general manager Chris Drury is serving as the general manager of Team USA. His roster included two excellent young netminders, Cal Petersen of the Los Angeles Kings and Jake Oettinger of the Dallas Stars. Both are just beginning to establish themselves in the NHL, and have delivered the best team save percentage of the tournament so far (.953).

The U.S. team’s tournament-best penalty killing, at 95.45 percent, is a testament to the entire team’s willingness to work hard, block shots, and do whatever it takes to prevent goals. That effort is led by 36-year-old Brian Boyle, the big defensive-minder center who signed on with Team USA in an attempt to resurrect his NHL career after he didn’t catch on with an NHL team this season.

One-time Detroit Red Wings forward Justin Abdelkader also saw the World Championship as a showcase opportunity after playing in Switzerland last season. The 34-year-old was initially named captain of Team USA, but was sidelined by a lower-body injury in the sixth game of the round robin. With a pair of crutches under his arms, Abdelkader has now moved behind the bench, ready to offer any assistance he can to U.S. coach Dave Capuano as the Americans try to bring home World Championship gold for the first time since 1960.

Offensively, the Americans have been led by Conor Garland of the Arizona Coyotes, who’s tied for third in tournament scoring with 5-5-10 in eight games. Trevor Moore of the Los Angeles Kings has eight points and Dallas Stars rookie Jason Robertson has seven. This is the first time that Garland and Moore have suited up for Team USA at any level. Robertson won a silver medal as part of the U20 team at the 2019 World Junior Championship.

After starting 0-3, the Canadian team assembled by rookie general manager Roberto Luongo was at risk of missing the playoff round for the first time in tournament history. Canada’s fortunes began to turn when forward Andrew Mangiapane joined the group in Game 4 after serving out his quarantine. Though his Calgary Flames’ regular season didn’t end until May 19, three days before the tournament began, the 25-year-old forward jumped at his first-ever opportunity to suit up for his national team.

Slotted onto a line with Canadian captain Adam Henrique and Ottawa Senators forward Connor Brown, Mangiapane made an immediate difference. In five games, he has five goals and nine points, including the game-winning tap-in off an incredible feed from Troy Stecher as Canada erased a 1-0 deficit to eliminate Russia in 3-on-3 overtime in Thursday’s quarterfinal.

Canada’s coach is also using the tournament to showcase himself. It’s Gerard Gallant’s first time back behind a bench since he was let go by the Vegas Golden Knights in January of 2020. He’s looking to get back into the NHL, and was interviewed last month for the vacant New York Rangers’ head coaching job.

While Team USA has been virtually unstoppable so far, expect a much more determined Canadian group to show up on Saturday (7 a.m. ET).

The second semifinal features Finland taking on Germany (11 a.m. ET). Unlikely silver medalists at the 2018 Winter Olympics, the Germans reached the final four at the World Championship for the first time since 2011 on Thursday, rallying from a 2-0 deficit to beat Switzerland 3-2 in a shootout.

The gold-medal game from Arena Riga will go Sunday at 1 p.m. ET, on NHL Network.