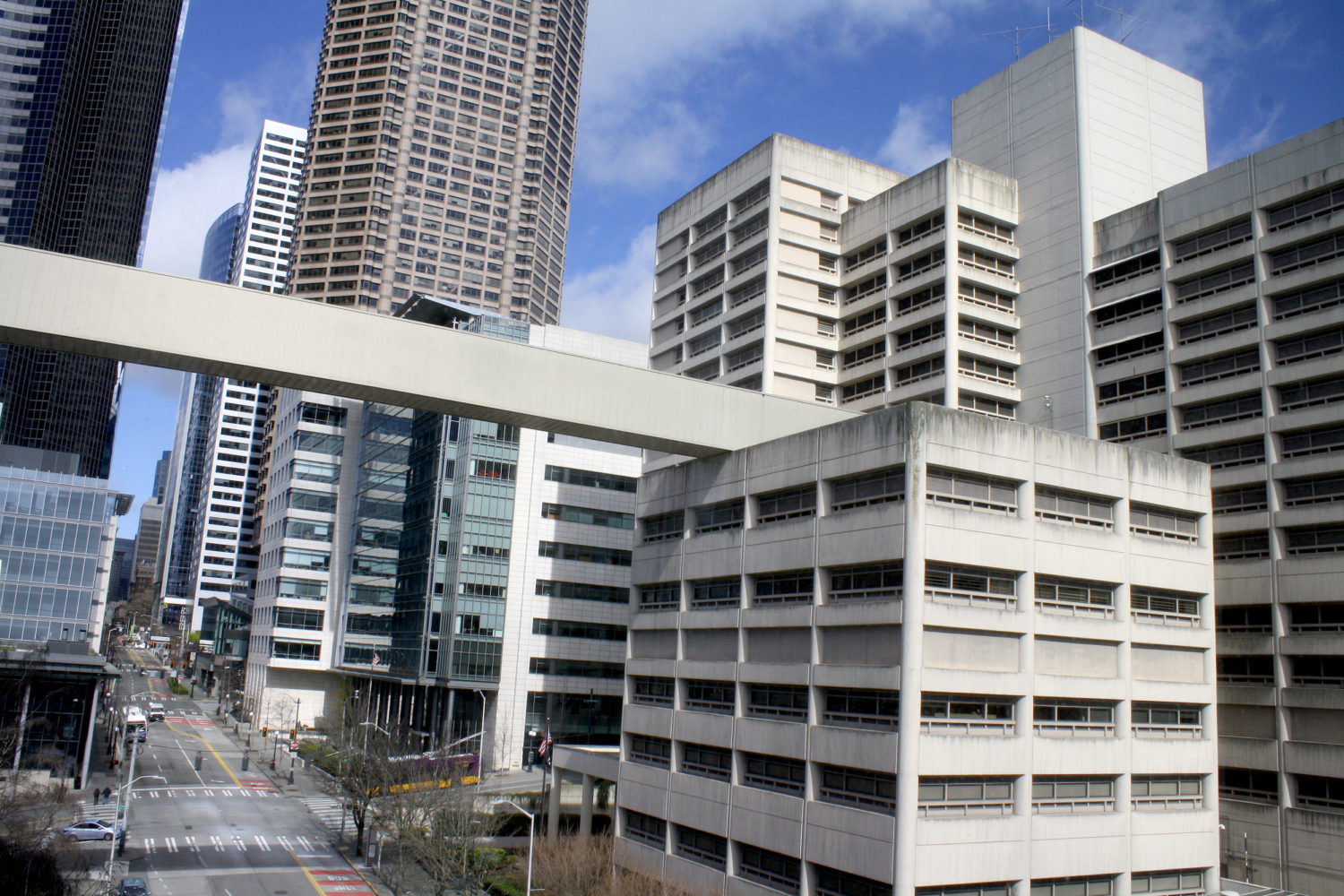 Covering COVID-19 is a daily Poynter briefing of story ideas about the coronavirus and other timely topics for journalists, written by senior faculty Al Tompkins. Sign up here to have it delivered to your inbox every weekday morning.

Even if Judge James Rogers excludes all cases of nonviolent crime and adds one extra judge, he estimates it will still take King County about 13 years to work through the backlog of criminal cases that have built up over the pandemic. That’s 13 years of longer jail times for some of the accused — who are still presumed innocent —and 13 years of waiting for delayed legal proceedings for the accusers.

“We have homicide and sexual assault cases that will be going out three, four years after they were filed,” said Rogers, presiding judge of King County Superior Court. “And people will have been incarcerated, waiting for trial for all of that time. People who are the family of homicide victims will have been waiting that whole time for closure. Victims of child sexual assault cases, they actually will grow up during the time their case is pending, which is just appalling.”

Seattle Municipal Court, which handles misdemeanors and gross misdemeanors, also faces a pileup. Attorneys handling between 400 and 500 cases have reported being ready for trial but with nowhere for the cases to be heard, according to Josh Sattler, the court’s chief clerk. Roughly the same number are in predisposition, meaning the court is facing a backlog of about 900 cases. Normally Seattle Municipal Court has no backlog.

It is not just trials that are backlogged. Prosecutors are overwhelmed with cases that have piled up. One prosecutor in King County said there are 3,000 cases in his county just waiting for approval to be filed.

In Genesee County (Flint), Michigan, the backlog is 1,200 cases long, including hundreds of jury trials that are on hold.

In Utah, the backlog means the courts will be calling a lot more people than usual to serve on juries. Fox 13 in Salt Lake City reports:

Judges are anticipating needing to hold more trials this year, since many simply couldn’t go forward in 2020 because of the deadly virus. It has affected incarcerated defendants and even more simple cases because of precautions needed during the pandemic.

“This has been a source of concern for us. One of the challenges with the courts is, unlike any other institution in the state, judges have the ability to compel a person to come to court. Both to be a witness and testify, but also be a juror and sit in judgment in the case,” Michael Drechsel, the assistant state courts administrator, said in an interview with FOX 13.

The Utah State Courts holds about 1,200 trials each year across the state. Of those, about 350 involve juries (the rest are bench trials before a judge alone). Because of COVID-related delays, the courts are looking at roughly 1,500 trials this year.

“We are all going to have to continue the number of trials we’ve got and would normally have scheduled in 2021 as well as all the cases that didn’t get tried in 2020,” Third District Court Judge Todd Shaughnessy said in a recent meeting of the Utah Judicial Council.

The bike shortage will run into the summer Sam Mack, co-owner of Mack’s Bike & Goods, repairs a bicycle, Wednesday, Sept. 23, 2020, at his shop in Evanston, Ill. Mack opened the shop several weeks before the coronavirus pandemic started and his business has been busy ever since. (AP Photo/Nam Y. Huh)

Remember last summer when bike shops said they were selling every new and used bike that they could get their hands on? Well, the update is that the tight supply will continue into this summer. It is another of those pandemic perfect storms where a supply interruption meets a spike in demand. Bicycleretailer.com says:

Figures released Wednesday show the industry received a surge of parts from overseas in March. Monthly imports of derailleurs, pedals, saddles, and other parts were at their highest level in at least 14 months, in some cases by large margins.

Complete bike imports also remained at high levels in March and were higher than the prior two months.

The increase, while welcome, is clearly not doing much to help bike shops get the repair parts they need.

“Not at all!,” said Christina Baanders-Decker, owner of Kansas City’s Midwest Cyclery. “10 and 11-speed chains and cassettes: Nonexistent! Saddles … one or two here or there. Derailleurs, I haven’t needed any. I stocked up,” she said.

Baanders-Decker and other retailers said they struggle to get repair parts — low-priced, dealer-quality parts, especially those needed to repair older bikes. Retailers and wholesalers emptied their back shelves of those parts last year and have never fully restocked.

The U.S. Census found that more people are riding these days:

People now are choosing bikes instead of mass transit for their safety to avoid crowded buses or metros. It also reported that cycling traffic after the pandemic began in 2020 increased by 50% from the same time the previous year in New York City and that several metro areas modified traffic patterns and opened more miles of roads to accommodate bikers and pedestrians.

Still, even with this growth, bicycles still make up a very small portion of the mode of transportation American commuters use. The District of Columbia led the nation with 4% of their workforce biking to work but only 0.5% of workers nationwide biked to work in 2019.

Traffic deaths hit a 13-year high, even with fewer drivers and miles driven

You would have thought that the pandemic would have had one benefit: fewer traffic fatalities. You would be wrong. It seems that with less traffic, people drove faster and died in crashes at a rate we have not seen in more than a decade. Forbes summarizes the data:

NHTSA’s data show significant increases in fatalities during the third and fourth quarters of 2020 as compared to the corresponding quarters of 2019. The federal safety agency will continue to carefully analyze various data sources to understand how the risks to vulnerable road users might have changed during 2020 and the contributing factors for the increase.

Preliminary data from the Federal Highway Administration reveals that vehicle miles traveled fell during 2020 to about 430.2 billion miles, or a decline of about 13.2% from 2019, the year before the coronavirus pandemic led to massive changes in work, commuting and consuming behavior of most Americans.

The sad truth is that the span from Memorial Day to Labor Day is the deadliest 100 days of the year for teen drivers. And now that young people can get vaccines, experts fear they will be out and about more than usual.

It’s OK to get a COVID-19 vaccine at the same time as other vaccinations, CDC says

One question that parents have been asking is whether kids who are approved for COVID-19 vaccines can get that shot at the same time they take other vaccinations. The answer is yes. The Centers for Disease Control and Prevention changed its guidelines to allow the co-administration of vaccines, a move the American Academy of Pediatrics supports. A cicada is seen after shedding its nymph shell on the trunk of a tree, early Monday, May 24, 2021, in Lutherville-Timonium, Md. (AP Photo/Julio Cortez)

Look, I generally live by the credo of “to each his/her/their own,” but the Food and Drug Administration says, “Don’t eat #cicadas if you’re allergic to seafood as these insects share a family relation to shrimp and lobsters.”

I only bring this up because people are posting recipes that include the bugs. Some restaurants are offering cicada tacos.

And, my favorite, some have turned the cicadas into action figures.

Friends, it is possible that we have been cooped up too long.

What if your COVID-19 booster shot comes from a different manufacturer than your first?

The National Institute of Allergy and Infectious Diseases is launching an early-stage trial to research whether people can effectively and safely be given a booster shot different from their original COVID-19 vaccine.

By mid-summer, we should have the results from a study of 150 patients. Researchers want to know that if we must get COVID-19 boosters, whether we would have to get a booster shot from the same provider as our original vaccine or if, for example, we started with a Moderna vaccine and could get a booster from Pfizer.

The study could be critically important. If it doesn’t matter what brand of booster we have to take, it would make the logistics of a booster campaign easier.

It is pretty rare to see 20 journalism groups, including labor unions, come together on much of anything. But they are raising their collective voices against a California state Senate bill that started out trying to protect journalists but now would limit access to protests once cops move in.

SB 98, as originally introduced by Sen. Mike McGuire, would have modestly extended existing state protections for journalists working in disaster areas to also apply to journalists covering civil disturbances. But an amendment added by the Senate Appropriations Committee on May 20, 2021, would require journalists to seek permission of a police commander to enter closed areas around protests — a hurdle that doesn’t currently exist under state law. This is a clear attempt to hobble this bill. Journalists should not need permission from a police commander to cover protests, just as law enforcement-issued press credentials should not be required in order for journalists to exercise their First Amendment rights in a public forum.

Here is an excerpt from the original bill and the highlighted language amending it:

Documenting ‘6 Days in May’

There is a danger that when a newsroom produces a documentary about how it covered something as momentous as George Floyd’s murder and the days that followed that the public might see it as a “it’s all about us” moment. But what WCCO-TV in Minneapolis produced is not that at all.

Years from now, when there is enough space to know if that moment in time really was a turning point in American justice and policing, I think we will be grateful to have documentation of how journalists in one newsroom confronted the story.

For a few years now, researchers have been experimenting with animation to see if they could prove that animated graphics would make local news more interesting and make hard-to-tell stories more understandable.

The animators worked at TV stations in Boston and Chicago and the audience research found that animation helps. You can see the examples they produced here.

Here in Tampa Bay, we have a bear that is wandering around. It might not be much news for those of you in some parts of the country, but we are more used to panthers and gators. Anyway, the bear has launched a Twitter page.

The Florida Fish and Wildlife Commission is reaching out without luck:

We’ll be back tomorrow with a new edition of Covering COVID-19. Are you subscribed? Sign up here to get it delivered right to your inbox.