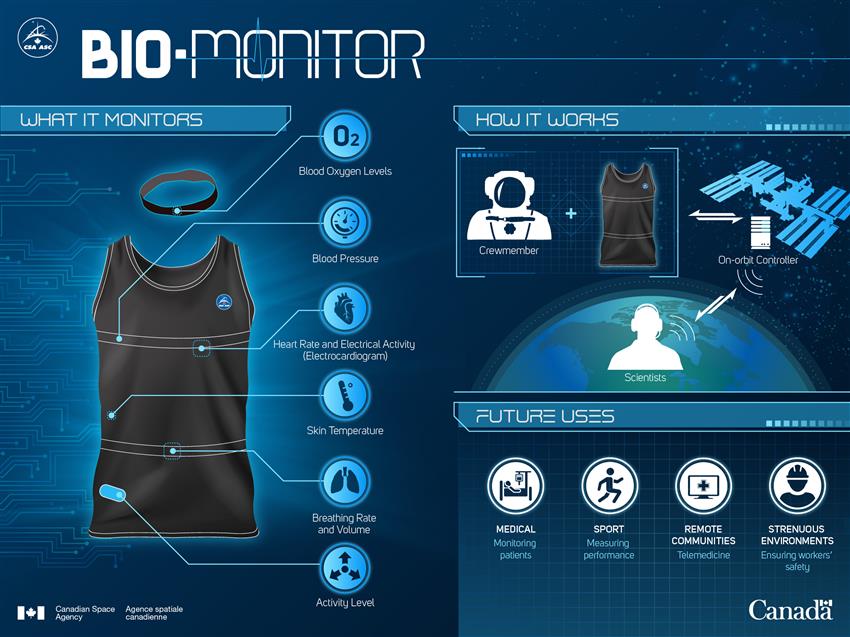 Hexoskin’s vital signs monitoring wearable, Astroskin, is outfitting researcher Kellie Gerardi for the products first private flight space mission aboard a dedicated Virgin Galactic research flight where she can test the International Institute of Astronautical Sciences (IIAS) spaceflight system. Kellie is scheduled to perform space experiments while testing new healthcare technologies in space, including the Astroskin Bio-Monitor, developed by Hexoskin with the support of the Canadian Space Agency (CSA). The complete Bio-Monitor wearable sensors system was first used by NASA and CSA in 2019 on the International Space Station. The Sports Techie community blog has covered Hexoskin with great interest since 2014. The race-to-space is going the way of privatization with the goal of commercial space flights led by the likes of SpaceX creator, Elon Musk, and Virgin Galactic founder, Sir Richard Branson. The pace to return to outer space over the past decade has accelerated the past few years leading to space flights to Mars and soon, Venus. Tourist space flights are not too far behind. Virgin Galactic also has designs to provide the space science research community with new benefits aimed to provide repeatable missions, meet cost conscious considerations, and provide an unapparelled weightless environment, enabling Gerardi the ability to conduct human spaceflight research. She plans to measure biological effects of launch, weightlessness, re-entry, and landing on spaceflight participants.

The purpose of the research mission is several layers deep, led by the notion to demonstrate while advancing novel scientific research benefits and applications that the spaceflight system provides for human-tended payloads.

Other mission priorities include the demonstration of conducting human research in suborbital flight, adding to Kellie’s previous research and data complied after several reduced gravity flight campaigns on Earth. This potentially groundbreaking research is in tandem with the National Research Council of Canada (NRC) and the CSA.

Visual the steps. During Virgin Galactic provided spaceflight, there will be a shutdown of the rocket motor creating a weightless atmosphere. Next, Kellie plans to unbuckle her space seatbelt and with intestinal fortitude, intense focus and lots of previous practice, physically and mentality carry out all necessary movements and sequences per experiment knowing this weightless effect only lasts a few minutes.

“This historic flight will demonstrate the role private space companies can play to advance our knowledge of human physiology in space, to prepare for future missions to the Moon and beyond” said Pierre-Alexandre Fournier, CEO and co-founder of Hexoskin. “Many private space companies are planning to use the Astroskin system for astronaut training and during spaceflight, because it’s already in operation in the International Space Station.”

A second piece of research includes a free-floating fluid configuration experiment, whose data can be used to help inform novel technologies ranging from fluid-based accelerometer system to humidifiers for spacecraft life support systems, and new syringe designs for administering medication in space.

The IIAS and Virgin Galactic teams will collaborate with academic and government partners to carefully plan Kellie’s flight activities to maximize the science and technology advancements gained from the research experiments.

“We’re thrilled to work with Kellie Gerardi and the International Institute of Astronautical Sciences to help further their research in the bio-medical field,’’ said Michael Colglazier, CEO, Virgin Galactic. ‘He added, “One of the unique aspects of our Spaceflight System is that it is pilot-flown, which means we’re able to fly different flight profiles that meet the needs of our passengers in the cabin – whether that’s scientific experiments or people – or in this case both. A big part of our mission is to provide scientists and researchers with reliable and frequent access to space for space-based research. We are very proud to fly Kellie so she can fulfill a lifelong dream, conduct important research, and inspire the next generation of researchers and astronauts.”

Mission training and preparation from Virgin Galactic is designed to prepare Gerardi for success regardless of the scenario. As the flight mission specialist, Kellie will rely on Virgin Galactic provided, on-site pre-flight support for all payload experiments.

Kellie Gerardi said, “To call this my life’s dream would be an understatement. I’ve been a champion of Virgin Galactic’s mission to democratize access to space from the earliest days, both during my time working a few test stands away at the Mojave Air & Space Port and through my years helping advance the regulatory framework for commercial human spaceflight with the Commercial Spaceflight Federation. The opportunity to fly as a payload specialist on a Virgin Galactic spaceflight brings everything full circle for me, and it’s nothing short of an honor to have a front-row seat to the final frontier. I’m grateful to IIAS for the support and confidence they continue to place in me, and I look forward to helping pave the path for many talented researchers who are sure to follow.”

Past training with the IIAS, NRC and CSA, allowed Kellie to operate each expected payload in reduced gravity flights. Each of these invaluable trainings adds to her already unique skill set as a payload specialist on this research mission. The payloads have bio-monitoring instrumentation, including the Astroskin Bio-Monitor wearable sensors system.

IIAS Founder Dr. Jason Reimuller said, “Kellie has consistently demonstrated capability and professionalism in dynamic, operational, and multi-national research environments while enabling novel research. Additionally, her natural ability for science communication will help expand our nonprofit educational and outreach missions, inspiring others to see space as both inclusive of all and as a laboratory to benefit all of humanity. We look forward to working with Virgin Galactic as we expand our research from parabolic flight and analog environments towards longer-duration microgravity exposures in space.”

Sports Techie, providing a safe, weightless environment is a feat researchers have needed to overcome in order to conduct human spaceflight research. Now seems to be the right time thanks to advancements by Virgin Galactic. Space sleep is another variable to study using wearable tech.

Astroskin is also in use for the purpose of medical research by scientists and clinical researchers on 5 continents around our planet.

Ideally, in the next 5 to to 10 years, these tests run by Kellie on the research mission to test the IIAS spaceflight system, while wearing an Astroskin Bio-Monitor, will result in getting civilians into outer space.

Virgin Galactic is betting on it heavy to happen sooner, rather than later.

See you later sportstechie in Seattle, Atlanta and around the world!