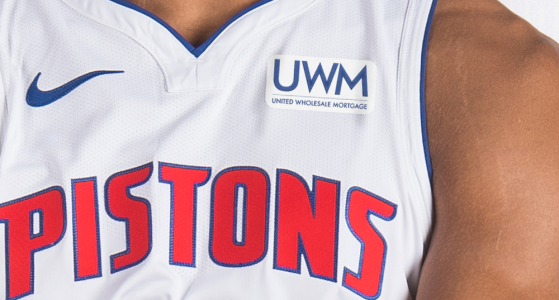 The multi-year deal will see the wholesale mortgage lender replace Flagstar Bank on the team’s playing jerseys starting from next season.

Financial terms of the arrangement have not been disclosed, but The Athletic’s Bill Shea noted that NBA patch deals are typically three-year contracts ranging from US$7 million to US$20 million per season.

The deal also designates UWM as the Pistons’ exclusive mortgage partner and a supporting partner of the franchise’s ‘Hoops for Troops’ community relations platform. The company will additionally be the presenting sponsor of the team’s Sunday regular season home games.

Other elements of the sponsorship package include television and radio broadcast advertisements, rotational banner placement on the Pistons’ website, as well as courtside rotational signage and digital signage inside the team’s Little Caesars Arena.

The deal comes on the back of a forgetful season for the Pistons, who finished 15th in the NBA’s Eastern Conference with a record of just 20 wins and 52 defeats.