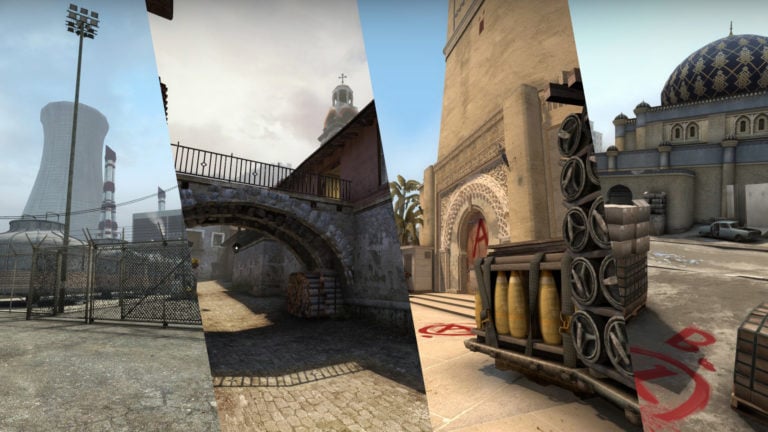 Counter-Strike has maps of all different shapes and sizes but only seven are available to play at any one time.

The Active Duty map pool features seven maps catered to the highest level of competition. These are the maps fine-tuned by Valve and made to be played by the world’s best teams on the international stage.

But some are better than others. We ranked every map in CS:GO’s Active Duty map pool, from the worst to the best.

The latest map to join the pool is a bit of a mess at the moment. It has potential in competitive but because it’s new, the meta has yet to be defined. With a few tweaks though, it could easily surpass Vertigo on this list.

Vertigo stands out like a sore thumb up against the well-redefined likes of Inferno, Mirage, and Dust II—but that doesn’t mean Vertigo isn’t fun. It might not be the most balanced map, but it has many interesting and dynamic chokepoints, smoke spots, and boosts.

Nuke is an absolute headache for newcomers to Counter-Strike. The main building has three-floor levels: a catwalk level, a main level (A site), and a basement level (B site). The entry points into each site vary due to verticality and can be confusing when you’re maneuvering around the map. These factors, combined with the difficulty to discern nearby sounds as enemies, make Nuke a devastatingly difficult map to learn as a new player.

Similar to Inferno, Counter-Terrorists are given an absurd amount of map control at round start. When Terrorists successfully find their way into the bombsites, the defense is punished with a tough rotation on both sites. Another source of difficulty on Overpass is its long ranges of sight, which give a good edge to AWPers and anyone with excellent aim. This, coupled with adequate situational awareness, allows for a variety of playstyles from skilled aimers and smart planners.

Dust II is the most popular map in all first-person shooters—and with good reason. With three entry points into each bombsite and three lanes within the map, the layout balance is polished to every minute detail to prevent either team from gaining an advantage at the round start. Coordinated teams can prosper on Dust II, but solo queuers can also perform extremely well under the right circumstances.

Inferno is a Counter-Strike classic with an inherent risk and reward system based solely on a team’s map control. Counter-Terrorists are given map control at the start and Terrorists must find ways to push them back to obtain control of the bombsites. Communication is the key to success on Inferno since taking a site by yourself on both defense and offense is incredibly hard. This important point puts emphasis on the fact that CS:GO is a team game—not a game of individual showboating.

Mirage is a three-lane map that’s perfect for learning strategy. The round pace can be based heavily on the aggression of the Terrorists, making it easy for Counter-Terrorist versatility throughout buy rounds. Like a map that requires good knowledge of rotations and map control, the momentum of Mirage can be swayed with a good execution or retake phase since the map layout allows for variations of both phases for both teams.