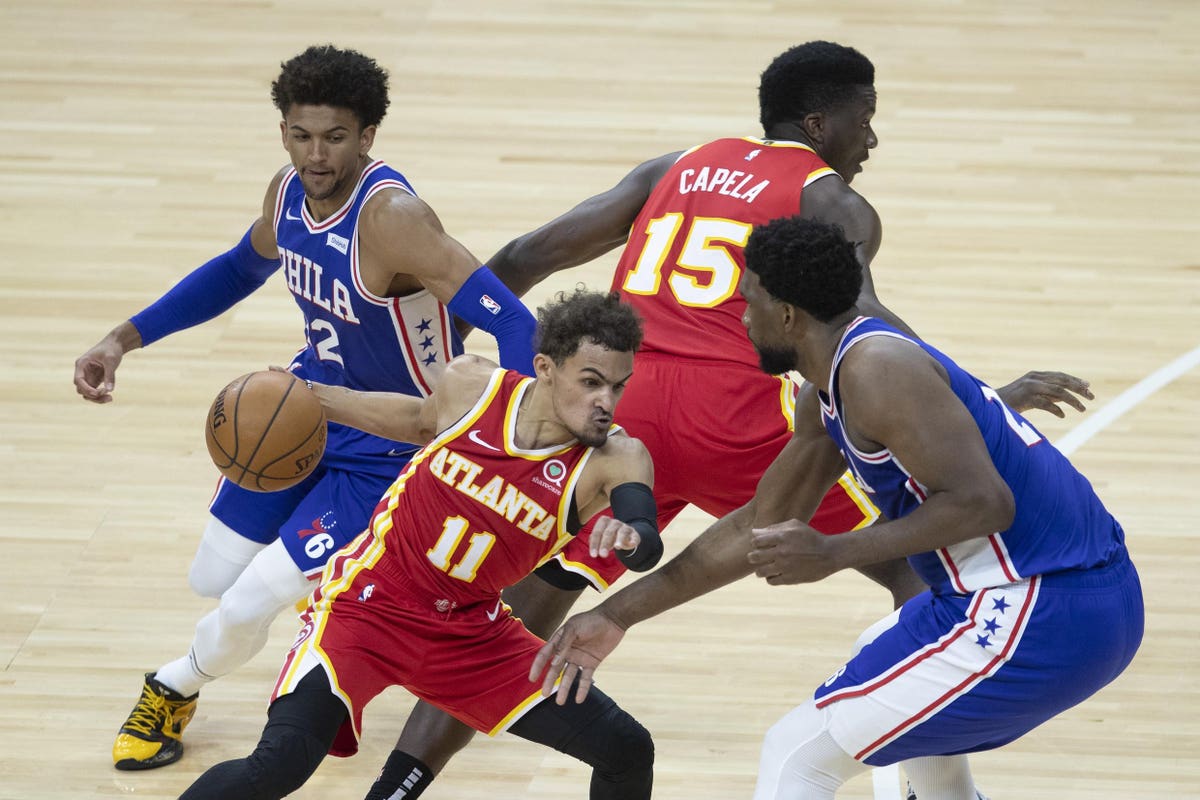 After making quick work of the Washington Wizards in the first round of the 2021 NBA playoffs, the Philadelphia 76ers’ real tests are about to begin.

The status of Joel Embiid’s knee will determine just how far they’ll advance.

Embiid is currently sidelined with a “small lateral meniscus tear” that has him listed as “day-to-day” for now. According to ESPN’s Adrian Wojnarowski, “managing potential swelling and pain in the knee will play a significant part in how soon Embiid will be able to return to the floor.”

The Sixers closed out the Wizards sans their MVP finalist with a well-balanced 129-112 victory in Game 5 on Wednesday night. They’ll now advance to the Eastern Conference Semifinals, where they’ll face an Atlanta Hawks team that just upset the fourth-seeded New York Knicks.

Because of the uncertainty surrounding Embiid, the Sixers are only slight favorites to beat the Hawks in the series, according to FanDuel Sportsbook. If Embiid isn’t able to return for Game 1 on Sunday, the Sixers will need to make adjustments, beginning with their starting lineup.

Who starts in place of Embiid?

In Game 5 against the Wizards, head coach Doc Rivers started Matisse Thybulle in Embiid’s place to keep backup center Dwight Howard with the reserve unit. Thybulle finished with seven points of 3-of-5 shooting and one steal in 16 minutes, although Wizards guard Bradley Beal drew three fouls on him over that stretch.

After the game, Rivers told reporters that the Sixers’ coaching staff went back and forth on Embiid’s replacement before settling on Thybulle.

“I tell you, trying to figure out who to start tonight, it was unbelievable how many times we switched lineups in the last 10 hours,” he said. “We were all over the place. I thought as a staff, we did a hell of a job settling and going with it. That was good. Good for everybody.”

The Sixers outscored the Wizards by 9.5 points per 100 possessions when Thybulle shared the floor with Ben Simmons, Seth Curry, Danny Green and Tobias Harris, but that small-ball unit struggled with rim protection. That could be an issue against a Hawks team with an electric, slithery lead guard in Trae Young and a 6’10” lob threat in Clint Capela.

The decision of who to start in place of Embiid may come down to how the Sixers decide to defend Young.

Who draws the Trae Young assignment?

The Sixers’ three regular-season games against the Hawks didn’t provide much of a template for how they’ll defend Young in the playoffs. Thybulle and Simmons missed the first game because of health-and-safety protocols, while an ankle sprain sidelined Young for the second meeting.

In the lone game where both teams were anything close to full strength, Green spent the most time on Young by far. Young scored 15 points on 4-of-9 shooting with Green as his primary defender and had 17 points on 6-of-10 shooting against the rest of the Sixers.

If Embiid plays in Game 1, either Simmons or Green figure to get first crack at Young. But if the Sixers are without their All-Star center, Thybulle may draw another start so he can take the Young assignment.

After the Sixers’ Game 5 win over the Wizards, Thybulle looked ahead to the challenges Young would present in the conference semifinals.

“He’s a dynamic scorer and passer,” he said. “He draws a lot of attention out of the pick-and-roll. His ability to stretch the court with his three, with his range … I think we definitely match up well with these guys. We’re one of those rare teams that has a lot of options on defense, so we have the opportunity to throw a lot of guys at him. I’m fairly confident in our ability to match up with him.”

Where does Seth Curry hide?

The Wizards played into the Sixers’ hands by starting Raul Neto in three of the five games, which gave Curry a place to hide defensively. Even when Curry got crossmatched against Davis Bertans, the 6’10” sharpshooter lacked the off-the-dribble chops to punish his much smaller defender.

The Hawks won’t present the Sixers with such a luxury.

Curry logged the most time against Tony Snell in the two teams’ final regular-season matchup, but De’Andre Hunter has since replaced Snell in the Hawks’ starting lineup. The 6’8″, 225-pound sophomore has six inches and 40 pounds on Curry, but the Sixers might not have a better option on which to hide him.

Regardless of whom Curry draws as his primary defensive assignment, Young and Bogdan Bogdanovic figure to target him relentlessly via switches. If he’s unable to hold his own, the Hawks might play him right off the floor.

Curry erupted for a playoff career-high 30 points in the Sixers’ Game 5 victory over the Wizards, and the Sixers will need that sort of increased scoring output from him until Embiid returns. However, he might have to end up doing most of his damage against bench units if the Hawks’ starters repeatedly attack him.

How does Doc handle his rotation?

The Wizards didn’t have the size to hang with the Sixers, but the Hawks are one of the few teams that match up well with them.

Between Hunter, Capela and the 6’9″, 235-pound John Collins, the Hawks should be able to wall off the paint and prevent Simmons from doing too much damage as a driver. They also have a 6’10” sixth man in Danilo Gallinari, who could cause the Sixers major issues given their lack of forward depth behind Simmons and Harris.

Rivers’ rotations will thus be one of the biggest X-factors of the series.

Rivers turned to his all-bench lineup throughout the Wizards series, but that will be less of a viable option against the Hawks. Until Embiid returns, the Sixers may need one of Simmons and Harris on the floor at all times.

Rivers will also need to figure out what to do with Shake Milton, who struggled throughout the Wizards series. He turned more to Tyrese Maxey as that series progressed, and the rookie guard rewarded his coach’s faith with strong outings in Games 4 and 5.

“I think he’s a hell of a player,” Rivers said about Maxey after Game 5. “I think he has found himself. He’s figured out now how to play, how we need him to play, what makes not only him a good player, but making everybody good on the floor when he’s on the floor.”

Capela could also pose major problems for the Sixers’ rotation patterns. If he dominates as a lob threat, Rivers may lean more heavily on Howard, but Howard-Simmons lineups got outscored by 10.4 points per 100 possessions during the regular season.

Between their Curry defensive conundrum, how to guard Young and how to stifle Capela as a lob threat, Rivers and his staff will have a number of issues to solve before this series tips off Sunday.

If Embiid is able to return at some point, the Sixers have the talent to advance past the Hawks and take on either the Milwaukee Bucks or Brooklyn Nets in the Eastern Conference Finals. But if he winds up missing this series, the Hawks have enough potential mismatches to knock out the top-seeded Sixers.

Unless otherwise noted, all stats via NBA.com, PBPStats, Cleaning the Glass or Basketball Reference. All salary information via Spotrac.