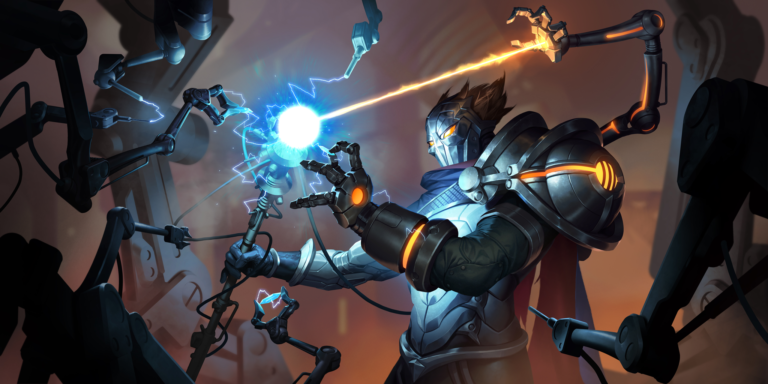 When Riot Games added Empires of the Ascended to Legends of Runeterra in March, it also updated its popular single-player Lab of Legends game mode. The update brought two new champions and a fresh mechanic in the form of rerolls to give players a chance to improve their odds and fish for better strategies.

In addition to improvements to the game mode, Riot also added a difficulty slider with Hard, Heroic, and Legendary options, which can be accessed as long as players can complete the Lab on each subsequent difficulty.

Completionists trying to win on Legendary with each champion can look toward this list for assistance when trying to figure out which powers synergize well with their strategies.

Here are two of the best passive powers for each champion at each rarity.

Aphelios is one of the few champions that enjoys common passive powers more than rare or epic. This gives him higher odds at saving rerolls due to his ability to rely on lesser boons.

While Aphelios doesn’t mind multiple copies of Wild Inspiration, there are still other treasures that Aphelios can look forward to in other rarity slots that synergize with his Moon Weapons.

As the second most expensive champion, Heimerdinger requires a bit of assistance to get online before he can make an impact. One way to focus on aiding the Revered Inventor is to pick treasures that assist in casting spells, like Sorcery and Spellslinger.

While Lulu leans toward aggressive strategies, she needs a bit more help to optimally use them since support requires having board control. This means any treasures that give her a chance to obtain units for free, like Out of the Gates, Lil’ Buddies, or Nature’s Revenge, would be appreciated.

As the cheapest champion on this list, Lucian can be pulled out by Out of the Gates, which can serve as a way to tutor him consistently. In addition, since Lucian relies on allies dying, token-spawning powers like Lil’ Buddies and Nature’s Revenge can provide fodder to help level him up.

Riven’s Reforge mechanic becomes effortless to perform if you manage to find either a Wild Inspiration or Spellslinger. Thankfully for Riven, Wild Inspiration is a common, which makes it easier to come across if you’re aiming to force a Riven build.

Braum has the most defensive nature of all champions on this list. That means any offensive powers he can pick up will allow him to win games more easily than other champions.

Miss Fortune’s deck is one of the better lists that can run on its own without seeking specific passive powers. Despite this, if you pick up a Domination, this will allow Miss Fortune to snowball to ridiculous heights due to the extra number of free attacks you’ll be able to declare.

While Hecarim is the most expensive champion on this list, his decklist has a hilarious infinite combat if you can manage to land a Stark’s Fervor item on one of your Shark Chariots while picking up Nature’s Revenge.

If you do find that rare combination, each time you declare an attack, a Shark Chariot will spawn and immediately die after attacking and provide you with another attack, looping forever.

Similar to Lucian, there are multiple ways for Azir to find success through all of the treasures in the game. If you’re looking for absolute victory, Yipp’s Genius is essentially an auto-win due to its ability to buff Azir’s Sand Soldiers to a ridiculous amount each time they spawn.

Since Taliyah is by far the weakest champion on this list, she needs as much help as she can get with potent passive powers, especially before you can build your deck better. Any treasure that grants you a chance to contest the board, like Lil’ Buddies and Nature’s Revenge, is a tremendous help for the Stoneweaver.

You can try to reach Legendary with each champion and claim ultimate victory now since Lab of Legends is still in the Multi-Lab rotation alongside Duo Queue and Ultra Rapid Draw.