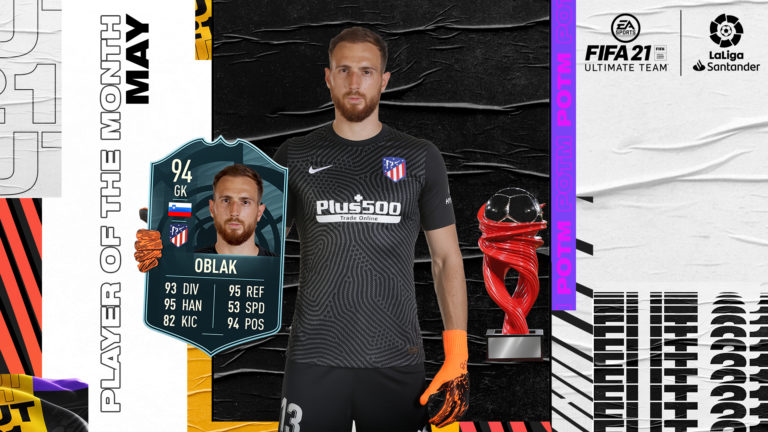 EA Sports added a 94-rated Player of the Month (POTM) version of Jan Oblak from Atlético Madrid to FIFA 21 today. This item is available through the squad-building challenge (SBC) menu in FIFA 21 Ultimate Team.

This is Oblak’s third special card in FIFA 21 Ultimate Team. The Slovenian goalkeeper earned the LaLiga POTM award for May because he was a crucial factor in Atlético Madrid’s championship win. EA has boosted all of Oblak’s stats, including Diving (+6), Reflexes (+5), Positioning (+4), Kicking (+4), Handling (+3), and Speed (+3) when you compare this POTM version with his 91-rated gold card.

This SBC costs around 95,000 FUT coins on PlayStation and Xbox consoles and is a touch expensive on PC (108,600) at the moment. If you’re not in need of a goalkeeper for your Ultimate Team squad, you might as well obtain POTM Oblak just to use it as fodder in an SBC of your preference down the line.

If you want to complete POTM Oblak SBC, you’ll have to turn in two squads. The first solution requires an 82-rated squad with 75 chemistry minimum and at least one Atlético Madrid player. The second squad must be 84-rated with a minimum of 55 chemistry, plus one Inform of Team of the Season (TOTS) card, and at least one player from the LaLiga.

If you complete the POTM Oblak SBC to use him on your FIFA 21 Ultimate Team, remember that you’ll have to link him with center backs from LaLiga since there aren’t any great Slovenian defenders at this stage in the game. You can use him around 95-rated TOTS Raphaël Varane from Real Madrid, 96-rated Team of the Year (TOTY) Sergio Ramos from Real Madrid, and 91-rated TOTS Jesús Navas from Sevilla)

Here’s the cheapest solution to complete POTM Oblak SBC right now, according to FUTBIN, a website that specializes in FIFA content.