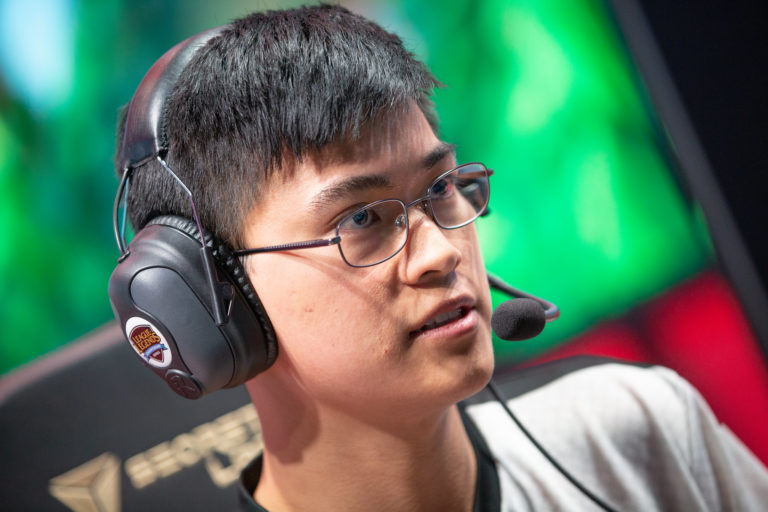 With April showers come May flowers, and for the best teams around the world, so too comes the Mid-Season Invitational, the first international League of Legends tournament of the year.

For most of the professional League players around the world, however, April falters lead to no competition in May. Instead, they’re faced with the prospect of a long offseason, a time to reset and prepare for the summer season and the World Championship. For the Dignitas players, despite being a surprising playoff participant in the 2021 LCS Spring Split, the offseason was a time of reflection and preparation for the upcoming Summer Split.

After finishing the 2020 Summer Split in eighth place and only barely squeaking into the expanded playoff picture, Dignitas came into 2021 with a clear goal in mind: build around jungler Dardoch. The team eventually retained support aphromoo as well, but they were the only players left from last year’s team. Rising star Johnsun was dropped in favor of Academy bot laner Neo, while 100 Thieves Academy players FakeGod and Soligo were brought in to man the solo lanes. Like a few other teams in the league, Dignitas was betting on a youth movement to reverse its previous season woes.

To most, the team looked like a mishmash of washed-up talent and unknowns, a clear favorite for last place in the regular season. Dardoch has had an up-and-down career, failing to find success at any of his past stops, while aphromoo seemingly peaked in 2015 on CLG when that squad became the first North American team to reach the finals of MSI. FakeGod and Soligo both bombed out of the LCS with 100 Thieves two years ago in 2019, while Neo was almost entirely unknown to anyone who hadn’t been following the Academy scene.

To FakeGod and Soligo, the lack of expectations from fans of the LCS was almost expected. Since most casual watchers of the LCS tend to not follow the Academy scene as closely, players like Neo and them often fly under the radar when they first reach the LCS stage.

“I think people just didn’t think we were good,” FakeGod told Dot Esports. “We were in Academy for a long time, and people don’t really follow that. We’re not super well-known names.”

“I knew we were going to be way better than how people were rating us, but in terms of how they were rating us, that was completely understandable,” Soligo said. “Especially for me and FakeGod on our 100 Thieves debut, I think we weren’t able to show what we’re actually fully capable of. Even in Academy the following year, we didn’t have the most stand-out Academy performances but we were definitely better than how we were playing at the time.”

It was that faith in their abilities that allowed the two longtime teammates to ignore outside perspectives and focus on their play in-game. Despite fielding three relatively young players, Dignitas defied all predictions and fought their way to the top of the LCS table, making it all the way to the second seed before dropping to fifth place during the final week of play. As a result, they had to start their playoff journey in the lower bracket, where a single series loss meant elimination.

Unfortunately for Dignitas, the team’s first opponent in the playoffs was a fired up 100 Thieves squad that had just taken a beating from Cloud9 in the upper bracket. Though the two teams had equal records during the regular season, Dignitas were swept out of the playoffs despite FakeGod feeling the team was “pretty favored” for the series.

“I think a lot of problems in this series was just a lot of nerves and stupid mistakes done,” FakeGod said. “For me personally, in the first game, I was very nervous and I did not really play well.”

For Soligo, nerves only played a small part in his performance, but he said he felt there could have been better preparation from the team before the series.

“I think number one, our practice and our preparation going into this series was not as good as it could’ve been, so we have a lot of things to look at in the future,” Soligo said. “Also, obviously, our performance on the day was also not ideal as well. I think some of the guys were nervous, sure, and I think that actually contributed to a large portion of why we didn’t feel cohesive today.”

Despite the team’s lackluster end to the season, both Soligo and FakeGod were proud of their growth throughout the split. Both pointed toward the veteran presences of Dardoch and aphromoo as the drivers of their success. The veteran duo “give very good feedback in scrims” and work hard to ensure that each member of the team is on the same page, according to Soligo.

Dignitas isn’t the only young team in the league, however. Due to financial restrictions caused by the COVID-19 pandemic, other organizations like Golden Guardians were forced to field squads composed of players with little to no professional League experience. Unlike Golden Guardians, who ended the regular season in last place, Dignitas had no problem integrating their younger players into the team.

The presence of strong voices in the jungle and support roles helped the three LCS newcomers adapt more quickly to the increased level of competition, according to Soligo, setting the team apart from other developmental rosters in the league.

“Other teams don’t have the system where they have veterans in key positions, so in our case jungle and support, who basically control how the map is run,” Soligo said. “Having veterans in those two positions and being able to just get the three laners working together is absolutely critical to how our team plays out.

“I think both of them are phenomenal leaders, and both do a phenomenal job of teaching us and disciplining us into doing the right things. They’re very hard on the rookies in scrims and they’re trying to make sure we’re on top and that we’re being brought up to speed so that we can understand the game in the way that they see it.”

FakeGod also pointed toward his and his teammates’ experience in Academy as a catalyst for their success. The former rookie of the split said he had “almost no experience in League” when he first debuted with 100 Thieves. Both Soligo and FakeGod joined the 100 Thieves Academy squad in December 2018, and while Soligo had previously played with the University of Colorado Boulder team and had brief stints on teams like Supernova and Polar Ace, FakeGod’s competitive experience was limited to two months with the University of California Santa Barbara’s team.

Both of them were thrust into the LCS spotlight less than half a year later when they were called up to the 100 Thieves main team in March 2019. But the team had a poor showing in the Summer Split, ending in eighth place, and they both were sent back down to Academy. This year, having had more time to develop in the Academy league and become more accustomed to being a pro player, FakeGod sees his better performance as “expected.”

“The last time I was in LCS, I only had one split in Academy for any experience at all, so I think it’s kind of expected that I would improve heavily after that,” FakeGod said. “If you just get into high levels of play right away, you have to reach a certain level of understanding before you can actually be able to play at a competitive level I feel like, so people who are just thrust in it sometimes have to work on getting the fundamentals down, and they can’t work on the things they would work on after that in time. That’s why sometimes it looks really bad.”

Now, the two longtime teammates are looking forward to the summer. FakeGod said he’s focused initially on winning his first playoff series, saying he’ll “think about [his individual goals] more” afterward. For Soligo, however, the goal is to reach the World Championship. He acknowledged that even though Dignitas failed to show off their full potential during the Spring Split playoffs, he knows the team has the talent necessary to make it to the international stage. To do so, however, both players also said they needed to improve on their own gameplay.

“For myself as well, I think my expectations are that I want to be able to develop into a mid lane who’s not just a role player,” Soligo said. “I want to become someone who can play more than just the control mages and can actually be able to be the difference-maker on the team. I think that’ll be the next step for me going into summer.”

He thought a little more, then revised his previous statement.

“That’s definitely the next step, no matter how it needs to be done.”